Despite your best efforts, you had a concussion. Or a traumatic brain injury. Your brain has been rattled and now you’re in that unfortunate state of trying to figure out what to do next.

Sure, it’s important to start doing everything you can to recover from your injury – like taking certain supplements and taking precautions as needed after a concussion. But equally as important is what you avoid after incurring a head trauma.

Here’s what to make sure you AVOID after you’ve had a brain injury:

1. Don’t Get Another F*#king Head Injury!

The number one stupid thing to do immediately after getting a head injury… is getting another one. Stacking multiple head traumas in a short period of time before the initial one has the chance to heal adds an exponentially problematic load to an already bad situation.

You wouldn’t keep running on a broken foot – unless it was life or death or you had a million dollar contract on the line. When an injury occurs, the reactive oxygen species causes a massive inflammatory load that is toxic to neurons and weakens the blood brain barrier making it more susceptible to toxicity from further injuries and leading to a vicious cycle.

The inflammation cascade and immune response that is created as a result leads to plaque formation (the hallmark of Alzheimer’s Disease), so what would have taken years to occur in the damaged brain is now happening in hours.

Ah, the sugar addiction. The most common and most detrimental addiction in our modern day society by far is indeed “killing us softly.” The data is pretty clear. Alzheimer’s Disease has been coined “Type 3 Diabetes” and for good reason.

Sugar causes the same problems in the small blood vessels as in Type 1 and 2 Diabetes, contributes to most chronic disease and inflammatory processes including cancer, is related to mood problems and juvenile delinquency, worsens memory and cognitive function and activates the addictive neuro-chemistry in ways super similar to heroin and cocaine.

In the short term immediately after injury, sugar blunts the body’s immune system and inherent cellular repair mechanisms, stresses the hormonal system by increasing cortisol and globally stimulates pro-inflammatory modulators. It is true that not all sugars are created equally. For example, fructose (especially that found in HFCS – high fructose corn syrup) is a metabolic nightmare for the body, it’s still helpful to stay on the lower sugar side of the equation no matter what the source.

3. Stress – Both Physical AND Emotional/Psychological

It makes sense to have rest and recovery for the physical system after an injury. Stressing an already stressed system is pretty clearly moving in the wrong direction for improvement. This is magnified even more so for concussion.

The “invisible” nature of most head injuries makes it difficult for some to fully recognize its full effects, and then when acknowledged, it can be even harder to get the environmental support necessary for complete recovery. This could mean asking off time from work, having someone take care of the kids for a few hours a day or coordinating ride shares instead of having to solo commute in hours of traffic.

Simply following these few caveats can go a long way in supporting recovery. After a concussion, the neurological system is inflamed and ultra sensitive. Immediately after a head injury, most people will attest to the feeling that the volume meter on all their senses just became significantly overloaded – potentially up to intolerable levels.

Thus, the least amount of external stimulation possible can be super supportive in directing the ongoing “surveillance” system of the brain towards the inner landscape of rest and rejuvenation. I have talked about this in regards to floatation therapy and its support of the parasympathetic nervous system.

EMFs (electro-magnetic fields) can become irritating. What was before not very noticeable now may become so. An example I’ve seen with many clients is a newly acquired headache experience whose onset is after looking at the computer monitor for too long or having a long cell phone conversation with the phone up to one’s head (as opposed to using special headphones or earbuds). This is where common sense comes in again. If you notice doing something with electronics (even if only for a short time) causes headaches, spaciness, fatigue or mood changes, then lay off and track those symptoms over time to see if they change at all.

This last recommendation is offered as a balance between comfort levels and the recognition that overuse of pain medications can blunt someone’s natural response to head injury. Anti-inflammatory agents like NSAIDS (non-steroidal anti-inflammatories) can be supportive in they do what they’re named for – lessen the post head injury inflammation.

So when in doubt, in the first phase of acute assessment and management of head trauma, pain medications are best used judiciously and only to the point that they are necessary. 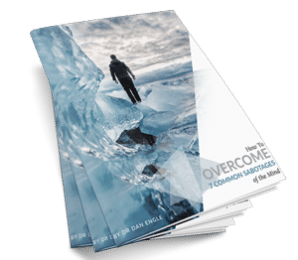 Download Dr. Dan Engle’s free guide, How to Overcome the 7 Common Sabotages of the Mind for a brief introduction to Dan and common “mental mind traps” we can get stuck in at various points in our lives.